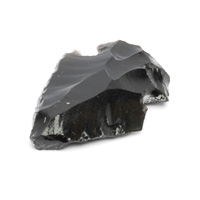 Black Tourmaline protects and heals on every level – physical, emotional, mental and spiritual. For this reason it is considered by many to embody the most powerful, protective crystal vibration. It has been used since ancient times by Shamans and healers, to suck up any negativity or disharmony, which is then transmuted and converted into positive energy.

If you have strong psychic abilities or do spiritual work, you can become ungrounded relatively easily. Black Tourmaline’s strong grounding vibration makes it one of the most popular crystals to be used for protection during ritual work and defence against negative energy of all kinds. It anchors the spirit to the earth through the Root chakra, providing a connection between the earth and the human spirit, whilst guarding against negative entities and lower based energies.

Black Tourmaline also shields from Electro Magnetic Fog, as it is electrical in nature, meaning it can store an electric charge. It does this by two processes. One is pyroelectricity the ability to generate electricity when heated and the second is piezoelectricity, which occurs when it is rubbed or exerted under pressure. Once charged, one end becomes positively charged and the other negatively, at which point it can repel or attract dust particles. Placing some Black Tourmaline crystals in the bedroom will aid you to regulate your body’s electrical system.

Mentally it can change negative thought vibrations into positive ones by calming obsessive behaviour. It can be used on the physical body to aid on-going stress and the symptoms of adrenal fatigue, the crystal facilitates this as it embodies a useful energy that relieves stress and strengthens the immune system.